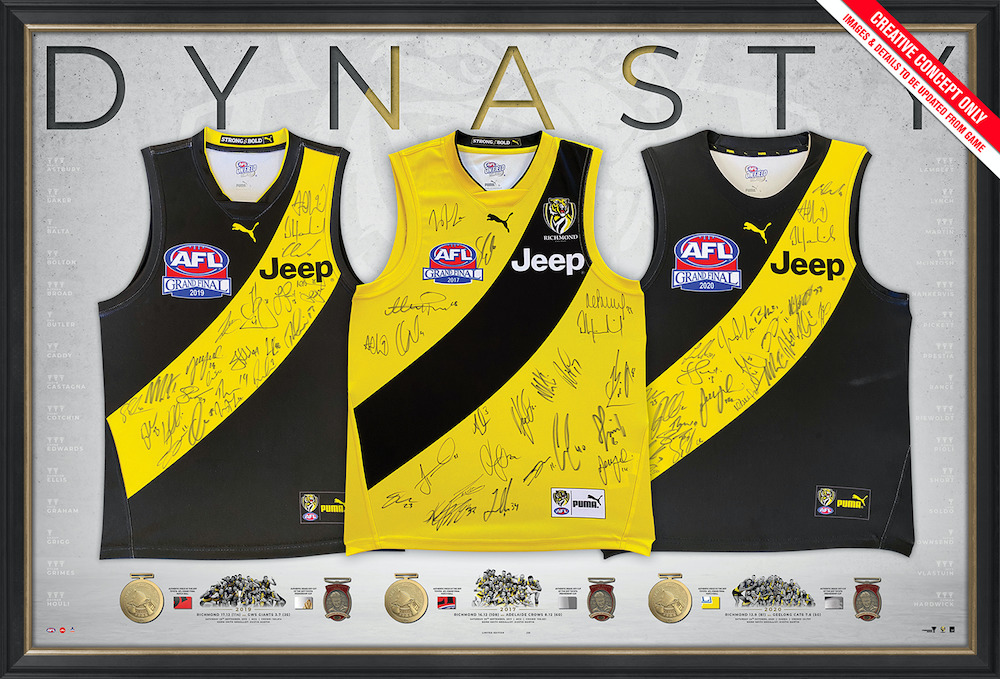 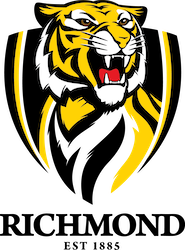 Scroll to right for more details

No bids yet on this item.

A truly unique and timeless memorabilia release, the ultimate tribute to Richmond's Golden Era, culminating in winning the 2017, 2019 and 2020 AFL Premierships Features an officially licensed Richmond 2017, 2019 and 2020 Grand Final guernsey, a guernsey from each Grand Final triumph, personally signed by every single Premiership player from each respective year, along with three-time Premiership coach Damien Hardwick, a staggering 69 signatures in totality. Included in the display is a set of authentic match-used ball pieces from each of Richmond's Grand Final triumphs of their Golden Era of 2017, 2019 and 2020. For the first time in Australian memorabilia history, an official gold leaf procured direct from the official manufacturer from each respective year's AFL Premiership Cup are integrated into each edition. Integrated into this incredible showcase display are three replica Premiership and Norm Smith Medals, paying homage to the Tigers' recent Premiership glories along with Dustin Martin's record-breaking Grand Final performances Features iconic team celebration imagery, individual player names and respective pictorial Premiership Cup representations, along with match scores from the 2017, 2019 and 2020 Grand Finals Boutique release strictly limited to just 25 editions worldwide. Officially licensed by the AFL Each edition accompanied by an individually numbered Certificate of Authenticity Presented in a deluxe timber frame, made from high-quality timber sourced from FSC-accredited suppliers Approximate framed dimensions are an imposing 1650 x 1050 mm. Product Condition: Perfect Condition Postage Information: Delivery of all items to be arranged post auction. Delivery method and location will determine costs. When bidding please select the $0.00 postage option.

What is Auto Bid Extend?

The Auto Bid Extend feature ensures that bidders will always have a chance to challenge bids placed in the final seconds of an auction. When indicated on a listing page, if a bid is placed during the last 5 minutes of an auction, the auction will automatically extend for an additional 5 minutes from the time of the latest bid. The auction will close once all bidding activity has stopped for a period of 5 minutes.

NOTE: Current Bid Amount and Countdown Timer are not "live." Click Refresh to update them or to see if the auction has been automatically extended by a last minute bid.